Dedicated Snyman makes history in the Cape
Ernie Els & Fancourt Foundation (EEFF) member Ian Snyman made a promise to himself at the beginning of the year to make the absolute best of the opportunity given to him by the Foundation. His results speak volumes for that dedication. Indeed, the 18-year old made history this year by becoming the first player ever to win five tournaments in the Western Province (WP) Premier Amateur circuit; a wonderful achievement. “These results are because of hard work; nothing else,” explained Snyman (pictured below), who will depart for America in August next year. “I am currently playing full time amateur golf and these results are encouraging because I would like to turn pro one day.”

Snyman, who moved into the top position on the WP Order of Merit, has won the King David Open, the Atlantic Beach Open, the Kuils River Open, the Metropolitan Open and the Durbanville Open. He also took the honours at the Westlake Foursomes and the WP Foursomes at Parow GC. His biggest win of his amateur career came in Mossel Bay where he won the Southern Cape Amateur Championship. He also represented WP at the recent Interprovincial Tournament at Westlake, where he was crowned the most valuable player, earning 8.5 points out of a possible 10.

Snyman then began 2015 in the best possible fashion, winning the Eastern Province/Border Stroke Play Amateur against a star-studded international field, holing a chip shot for birdie on the fourth extra hole of a sudden-death playoff at the Port Elizabeth Golf Club on Sunday 1 February. Snyman had produced a final-round 69 for a 206 total, 10-under par finishing the 54-hole tournament in joint first place with Gavin Moynihan – an outstanding performances by the top players because they were tested with very strong winds and rain over the two days. The Irish visitor, who is the current Irish and Scottish amateur champion, forced the playoff when he birdied six of the last seven holes.

“I am really relieved,” Snyman said. “I missed the cut two weeks ago in the Gauteng North Amateur. Although I was very upset with myself I solved the problem with my swing over the last few holes in the tournament which was held at Pretoria CC. I was really looking forward to this tournament. I could not have asked for better preparation for the SA Amateur Stroke Play.” 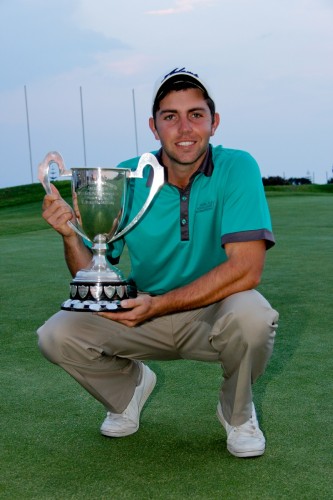 Young Luca excels in the wind to win The Royal Cape Open
Luca Filippi became one of the youngest winners of an Amateur Club Open in the Western Province when he won the Royal Cape Open on Sunday 19 October. The 15-year-old member of the Ernie Els & Fancourt Foundation (EEFF) kept his cool in tough windy conditions over the final nine holes of this 36-hole tournament to secure another big amateur title. Filippi’s rounds of 74 and 70 for 144, level par, ensured him a one-shot victory over the top amateurs in the Western Province. Sean Bradley, son of former Sunshine Tour player Wayne Bradley, finished second with rounds of 71, 74 for 145.

“I have been working on a few things in my swing and that is why this win means a lot to me,” commented Filippi. “There was a lot of pressure on me; this was not easy. The wind really made it difficult, especially playing the holes into the southeaster with a new swing.” Luca’s final-round 70, two-under par, was the best round of the tournament, which gives an indication that the windy conditions did not made it easy for the 78 players. Ian Snyman, another member of the EEFF, finished tied-5th with rounds of 76 and 73 for 149.

Brilliant 64 for Meyers at The Els Club
EEFF member David Meyers recorded the best round ever in a Glacier Junior Series tournament when he won The Els Family Trophy with a brilliant 8-under par 64 at The Els Club Copperleaf (pictured above) on Sunday 22 June. Eric Wower and Dean Martin finished tied second on 67.

Meyers attributed his win to a small technical swing change that he believes has given him a better understanding of his swing and overall game. “This is my best round in a tournament,” Meyers said. “It could not have come at a better time. I am really working hard on my game. My hands were too active in the swing. I have changed that and am therefore really looking forward to the two National Order of Merit tournaments during the July holiday.”

According to the 17-year-old Meyers everything in his game was solid. He finished the two nines in 33 and 31, which included two eagles, five birdies and just a single drop shot. He finished his round strongly with three birdies over the final four holes.

The Glacier Junior Series, which features some 25 regional events around the country, started in 2010 and has been praised by Ernie Els. “Strong junior golf competition was fundamental to my development as a player and I have so many fond memories from that time in my life,” recalls Ernie. “I had some success, but the thing I perhaps remember most is the experience and the friendships gained from taking part in these events. That’s what I like so much about the Glacier Junior Tour Series. It creates opportunities to compete and gain the experience of competition and performing ‘under the gun’. That’s what it’s all about.”

Any junior with a registered SAGA handicap and who is not yet 18 is eligible. For details go to www.glacierjuniorseries.co.za

Fourth big amateur title for Bezuidenhout in 2014
EEFF member Christiaan Bezuidenhout cemented his position as the No.1 amateur golfer in South Africa with his fourth big win of the year when he took top honours in the Limpopo Open at Koro Creek GC from 3-5 July. Bezuidenhout, who won this title last year at Polokwane Golf Club, was rightly very satisfied with his rounds of 69, 67 and 68 for a 204 aggregate, 12-under par, which secured him a nine-shot victory over Jarred Miltz from Wanderers. “It is not an easy course,” said Bezuidenhout. “I played solid golf over the three rounds. My ball striking was good and my putter did the job on the greens. I could not have asked for better preparation before I leave for America.”

Bezuidenhout departed for America in mid-July and is competing in three big amateur tournaments, concluding with his first appearance in the US Amateur Championship, which will be played from 11-17 August in Atlanta, Georgia. “I am very happy with my game at the moment. I will be exposed to the best amateurs in the world in these tournaments in America. It will also give me a very good idea of the standard of my game compared against these top amateurs,” Bezuidenhout explained.

Young Aneurin stuns field in KZN Invitational
For some, Mount Edgecombe 16-year-old Aneurin Gounden’s victory in the KwaZulu-Natal Golf Union’s Invitational Stroke Play at Durban Country Club on Sunday 13 July will come as a surprise. After all, he can’t find a way into Mount Edgecombe’s premier league side and he was not selected for the KZN U23 team this year. Admittedly both are very strong sides and his time will no doubt come. But those who have been following the EEFF member’s progress on the junior circuit will know that he has been putting together some good scores of late.

The talent has always been there and now the fruits of his extra maturity are starting to show, which is fantastic. At Durban CC, he beat the best in KZN when he carded 73, 72 for 145 to win by one from Gavin Sole (Southbroom), Corne van Deventer (Vryheid) and Matt Saulez (Gowrie Farm). Veterans Sole and Van Deventer both had rounds of 75 and 71, while Saulez, who is another very promising teenager, had scores of 72 and 74.

“I made a swing change a while ago and because of that, it has taken some time to find my rhythm again,” said Gounden, who is coached by the highly rated PGA professional George Harvey at Mount Edgecombe. “This win has made the effort of all the hard work over the past few months worthwhile. It is never easy making these changes but from day one I believed in what Mr Harvey is trying to achieve with my swing. I cannot explain to you how happy I am with this win.” (Report by David Rush)

Rebula finishes 5th at hot Pinehurst
Despite spending more than 18 hours in the air to get there and having to overcome dehydration in his second round, Jovan Rebula still claimed a top-five finish in the prestigious Junior North and South Championship in the United States. Rebula, a Grade 11 learner from Outeniqua High School in George, rallied for a share of fifth after rounds of 69, 78, 72 for 219, 3-over par. Local golfer David Kocher won the tournament on a total of 211.

Rebula, an EEFF member and nephew of Ernie Els, shared the lead after an opening three-under-par 69 at Course 8 at Pinehurst in North Carolina. He dropped out of contention after a second round 78, which was played in extreme heat and humidity with temperatures reaching 40 degrees Celsius.

“I am very happy with my overall position looking at the quality of the field,” Rebula, said. “I am not looking for excuses, but something strange happened to me on the back nine of the second round. It happened in seconds. All of sudden, I started to feel bad, really bad. I felt so bad that I wanted to stop playing on the 16th hole. Afterwards in the clubhouse I found out that dehydration was the cause of me feeling so bad.”

According to Rebula the lesson he learnt on this trip is that you need to look after your body, especially when you travel long distances overseas. “Even if you feel well, you still need to make sure you look after your body. I drank water on the course but clearly that was not enough. You need to protect your body by taking extra supplements in the temperatures we experienced at Pinehurst.”

Rebula had travelled to Pinehurst with his fellow EEFF member Bianca Theron, who finished tied 56th in the girls’ tournament played at Course 6.

Rebula travelled the world the past holiday. Before he flew to America he represented the SA Junior side in the Toyota Junior World Cup in Japan. He finished in tied 10th position with solid rounds of 72, 71, 70, 66 for 279, 5-under par. Only 60 of the world’s best juniors received invitations to compete in this tournament.

The 16-year old Rebula, who earlier this year became one of the youngest winners of the 36-hole Qualifying Tournament for the SA Amateur Championship at Hermanus, will soon jet off again. This time it will be on a flight to Germany to compete in the Harder German Junior Masters which will be played at the Heddesheim Gun Neuzenhof Golf Club in Heidelberg from 7-9 August.

About the Ernie Els & Fancourt Foundation
The Ernie Els & Fancourt Foundation was founded in 1999 with the purpose of identifying and assisting young individuals from families of limited resources who show promise in the game of golf. It serves to provide these individuals with educational assistance and opportunities to play, and in so doing create an environment where not only their playing ability could be developed to its full potential, but they could be encouraged to become successful young leaders. Former members include Louis Oosthuizen and Branden Grace.