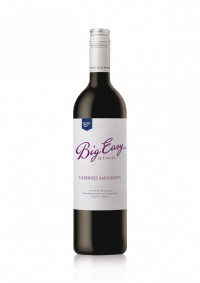 Louis Strydom has gone back to the traditional style made on the foothills of the Helderberg mountain, where Cabernet Sauvignon and Cinsaut were planted together from around the 1920’s, and the two varieties were later blended together to make a wine that is softer and rounder in style for early enjoyment. By the mid 1970’s this style was so popular, that Cinsaut was one of the most widely planted varieties in Stellenbosch. Over the years Cinsaut has all but disappeared in Stellenbosch, but now almost 50 years later, we have replanted Cinsaut on Ernie Els Wines to revive the traditional ‘Helderberg red blend’ style. This Big Easy Cabernet Sauvignon has up to 15% Cinsaut blended in to be true to the history of the Helderberg red blend, as well as provide an extension of our vision to be the best Cabernet Sauvignon producer in South Africa. Most importantly, for the consumer and wine lover, this wine will provide a delicious and accessible Cabernet Sauvignon.

TASTING NOTES
The great vintage of 2015 gives the Big Easy Cabernet Sauvignon a slightly more serious side. Rich and elegant with notes of luxury dark chocolate, cinnamon spice and ripe plums fill the glass. The palate is dark fruited, medium to full-bodied and is complemented by hints of dried herbs and salty liquorice. Finely etched tannins contrast juicy fruit and provide good structure and a layered finish. This wine begs for a rare cut of Sirloin and will drink well over the next 3-4 years.

THE 2015 VINTAGE
The vintage will be remembered as one of the driest and earliest in years, with a somewhat smaller wine grape harvest promising exceptional wines. Good reserves were accumulated during the post-harvest period in April and May, after which leaf fall generally occurred at the right time. A cold, wet winter led to the accumulation of sufficient cold units for the full breaking of dormancy, which contributed to even bud break. Warm weather in August resulted in earlier bud break, after which a warm, dry and windy summer kept vineyard growth under control and accelerated ripening by approximately two weeks. The dry weather also led to one of the healthiest seasons in years, with almost no losses due to diseases or rot. With the absence of the usual heat waves in most regions, cooler than usual weather in February was ideal for ripening and harvesting. Lower temperatures at night during this time contributed towards good flavour development in the white wines. Although somewhat smaller, this was one of the best, if not the best, harvests in years.

WINEMAKING
The grapes were hand-picked in the cool of early morning. On the sorting table, all excess stalks and inferior berries were carefully removed. Grape bunches were gently destalked with a Bucher de-stalker and lightly crushed. Fermentation took place in 7-ton, open-top stainless steel tanks with yeast WE 372 being added to the juice. The wines were pumped-over and punched-down manually 3 times per day ensuring maximum colour extraction from the skins. After primary fermentation the maceration period was 10 days before pressing. The wine is matured in oak barrels before blending and eventual bottling.