All the latest news and stories from the world of golf, Ernie Els Design, Ernie Els Wines, and across Ernie’s philanthropic interests.

1. Arcis Golf makes major donation to Els for Autism
The 2022 Arcis Golf ‘Round Up For Els for Autism’ campaign has raised more than $150,000 for The Els for Autism Foundation. A check presentation took place at last month’s Boeing Classic with Blake Walker, Founder and CEO of Arcis Golf, and Ernie (pictured below).

“Huge thanks from Liezl and me to Blake Walker and all our friends at Arcis Golf for this incredibly generous donation,” commented Ernie. “The leadership, members, and customers of Arcis Golf are wonderful supporters and advocates for our Foundation. These funds will help further our mission and services. By simply rounding up a transaction or participating in events at their courses, thousands of people have made an impact on the lives of those impacted by autism spectrum disorder.” 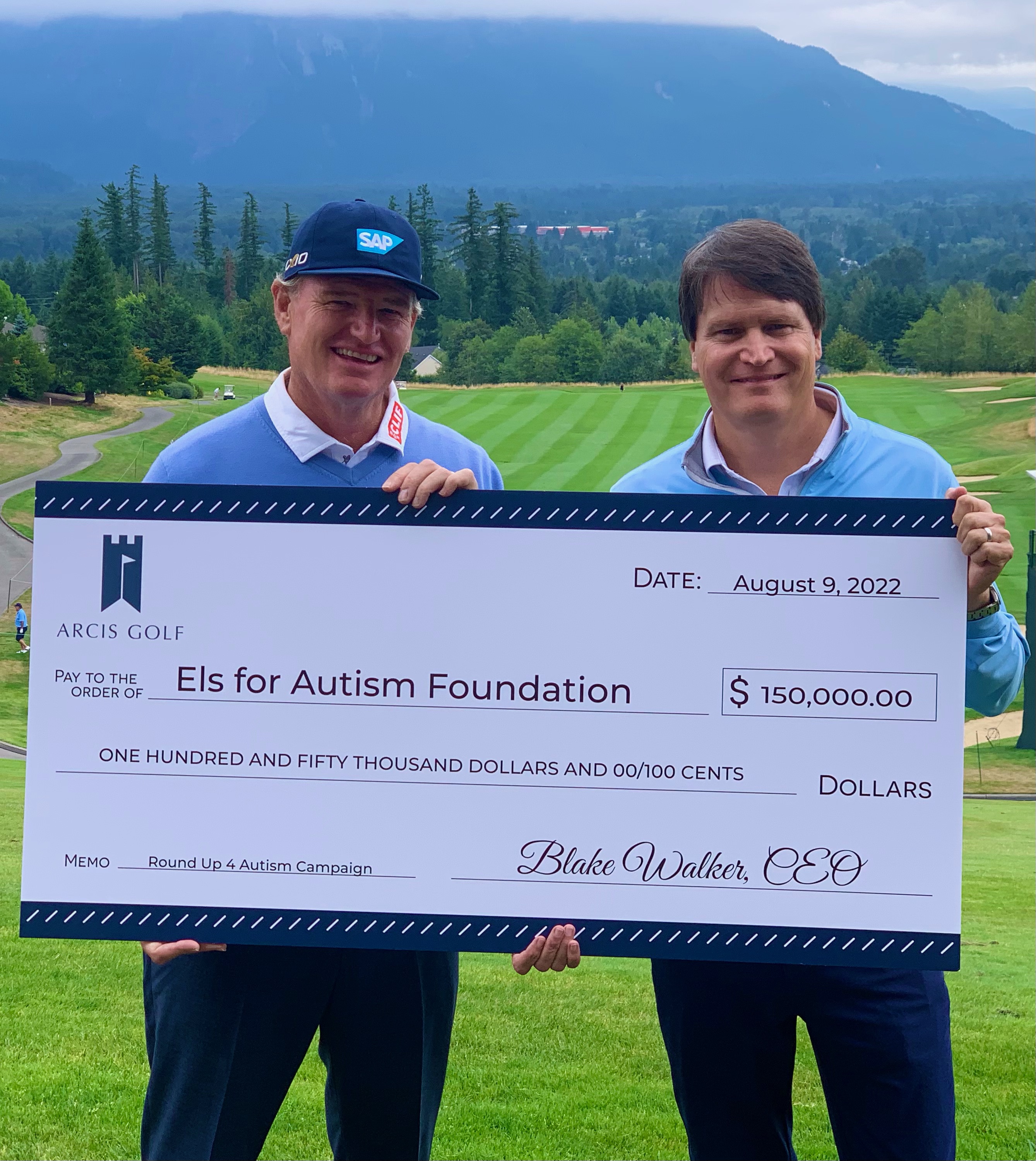 Founded by Ernie and his wife Liezl, The Els for Autism Foundation is a game-changing resource based in Florida, delivering and facilitating programs for people with autism spectrum disorder (ASD) to help them lead positive, productive, and rewarding lives.

This is the fourth year that Arcis Golf’s nearly 70 clubs and courses around the country raised funds by encouraging members and customers to ‘round up’ purchases of merchandise, food and beverage, or golf to the nearest dollar as a donation to the charity. Additionally, many clubs held special events and tournaments to support the campaign.

“The Els for Autism Foundation funds important programs that are the leading examples of what can be available to people with ASD,” said Walker. “Thanks to the generosity of staff, members, and guests at all our clubs, we are proudly supporting its initiatives and research.”

Ernie had extra cause for celebration as this year’s Boeing Classic marked his 10th year in partnership with the company. When he signed in 2012, Ernie became the first professional athlete to represent Boeing. “It’s an honour to continue to represent the greatest name in aviation and I’m grateful to them for their continued and generous support of Els for Autism,” tweeted Ernie.

2. Ernie’s 106th major appearance places him 13th on the all-time list
Ernie made his debut in the Open Championship as an amateur at Royal Troon in 1989. This year at St Andrews was his 31st appearance, with 13 top-10 finishes and two victories in 2002 and 2012. Ernie has now played in 106 majors, which places him 13th in the list of all-time major starts (see table below).

In addition, Ernie holds some notable records at the Open Championship…

– Ernie has shot more rounds in the 60s in the Open than any other golfer in history, a total of 42. Sir Nick Faldo is second on the list with 37.

3. Ernie remembers Tom Weiskopf
Golf lost one of its classiest and most elegant champions in the passing last month of Tom Weiskopf, winner of the Open Championship at Royal Troon in 1973 and a four-time runner-up at The Masters. After hanging up his spikes, Weiskopf enjoyed a successful career as a celebrated golf course designer. Loch Lomond in Scotland is considered one of Weiskopf’s – and indeed world golf’s – true masterpieces.

“So sad to hear the tragic news of Tom Weiskopf’s passing at the weekend,” tweeted Ernie. “Cruelly taken by pancreatic cancer. I was blessed to spend some wonderful times with him, especially at Loch Lomond in Scotland which was one of his finest golf course designs. RIP my friend. Thoughts and condolences to the Weiskopf family.”

“It’s a privilege to be able to take this victory,” commented Lawrence. “There’s so much history around this event, all the past champions, so I can’t wait to get my hands on that trophy. I’m just happy with my patience this week and I’m so pleased to be able to win.”

“We all remember him as a good student and a talented young golfer,” tweeted Ernie including a photo of Lawrence (pictured below). “Here he is, back in the day, receiving an Honours Award from my Dad. Shortly after leaving us he won the SA Amateur Championship in 2013 & 2014. He’s always known how to stay calm under pressure. Now he’s a two-time winner @DPWorldTour. Congrats!” 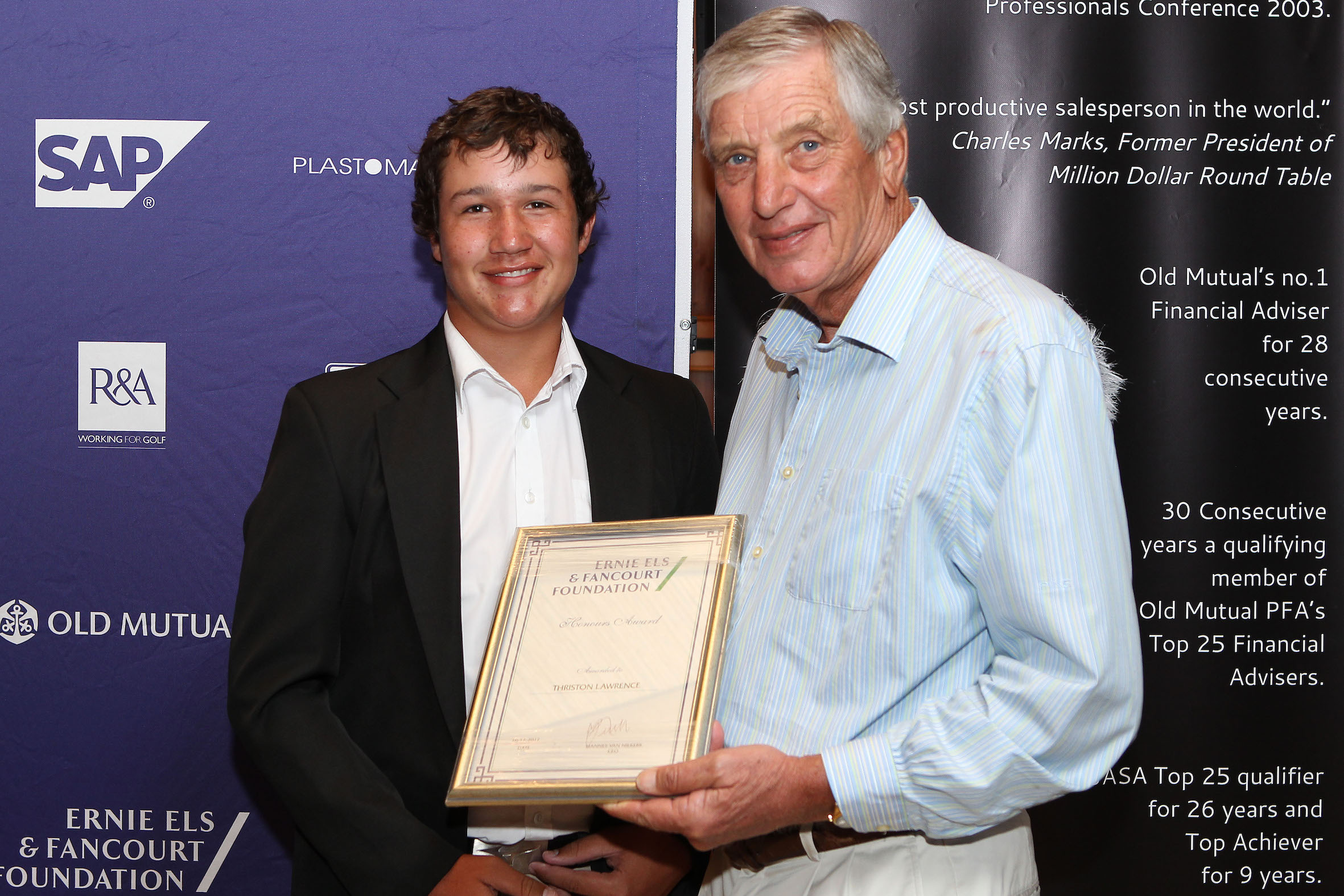 The Foundation was established in 1999 with the purpose of identifying and assisting young talented individuals, in golf, predominantly from families of limited resources and to deliver to them educational assistance and playing opportunities in order to produce successful young leaders and develop their playing ability to its full potential. Other former members include 2010 Open Champion Louis Oosthuizen and multiple tour winners Christiaan Bezuidenhout and Branden Grace.

5. Latest news from the team at Ernie Els Wines
September 1st marks the opening of the winery’s acclaimed restaurant (pictured below) for full dinner service on Thursday, Friday and Saturday from 6.30-9.00pm. New Head Chef, Wesley Aucamp, who joins the winery from KwaZulu-Natal where he was working at one of the province’s best restaurants, has created a real crowd-puller of a menu!

Wesley’s career spans from working in 5-star hotel kitchens before spending six years in America working at some of the country’s most prestigious private clubs. America was where he met one of his mentors, French Master Chef Michel Personnaz, who shaped and refined his cooking technique and palate. Having a strong appreciation for the best quality food and wine, Chef Wesley’s focus is on creating dishes using local, sustainably-sourced ingredients. Click here to view the full menu. For reservations, telephone 021 881 3588 or email bookings@ernieelswines.com. 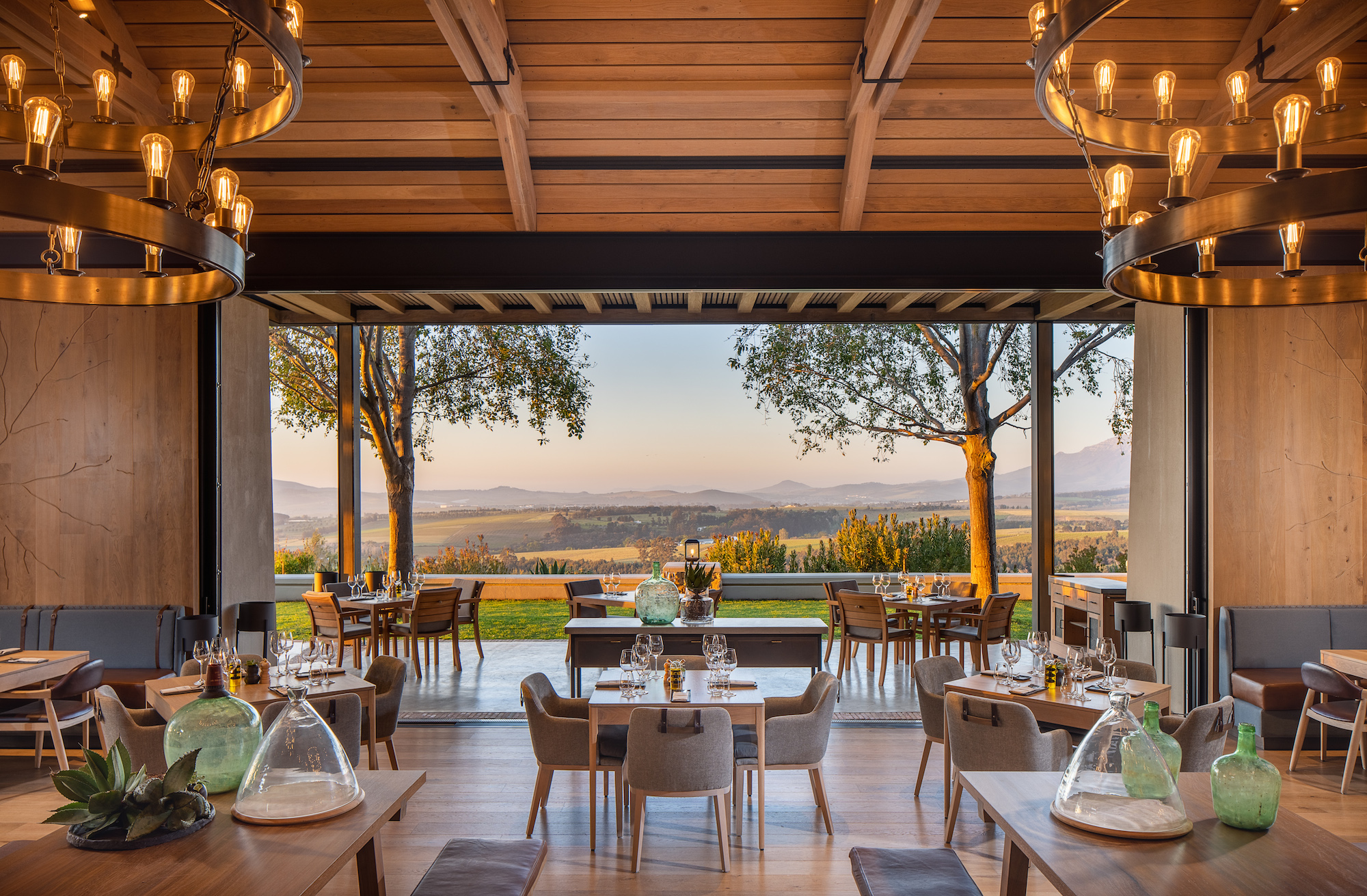 Tasting notes…
The Big Easy Chenin Blanc is filled with scents of the tropics. Pineapple, salted mango, pawpaw and squeezes of lime drift on the breeze of orange blossom and honeysuckle alongside the faintest whiff of summer fynbos. This transporting bouquet follows on to the palate, evolving into stone fruits, fresh cut peaches and zesty apple skin. The fruit is mouth coating and rich, lifted by an inherent vibrancy that crests into the lime-tinged finish.

An elegant, summery wine with a defined structure, the new Big Easy Cabernet Sauvignon Rosé is the perfect poolside treat. Refreshing and engaging aromatics of red hibiscus flowers, wild red-berried fruit, fragrant herbs and orange skin unfold. Superbly dry, there is just the faintest tug of tannins on the citrus-toned finish, drawing you back for another sip.

Both of these vintages are now available on the Online Shop as single bottles and also as part of the winery’s Big Easy Box. Visit the website: https://ernieelswines.com.