So, we obviously couldn’t start this latest report without me talking some more about my four captain’s picks for the Presidents Cup next month.

My first choice is a young man from Korea, Sungjae Im. He’s 21 years old; he’s 24th in the World Ranking and was Rookie of the Year on the PGA TOUR. He’s had one hell of a year. He played his way on the team with his consistency and coming to the meetings and showing a lot of spirit with the other players. I got to play with Sungjae at Pebble Beach in February; we actually played three days together. I loved the way he approached the game – very cool, calm and collected. Conditions didn’t suit him. It was very soft, but he never complained, and he kept playing and kept learning. I like that. He’s really finding the answers every week. He’s worked on his putting, and the putting’s come through big time. A win is just a matter of time for him, in my opinion.

My second selection is an even younger man, from Chile, just 20 years of age, Joaquín Niemann. What a great kid. I want to call him a kid – I mean, he’s my daughter’s age! But he’s played a very mature game this season. Winning his first event on the PGA TOUR, that solidified his position in my view. He’s had so many top-10 finishes and I knew as soon as I saw him that he was a very special player.

They’ve certainly achieved a lot for their age. Whether it is in the day we are living in, who knows, but I definitely wasn’t that good when I was 20, 21 years old, I can promise you that. But these kids are world-class players already and they have proven themselves. I’m really excited by the new blood that’s come in to our team.

My third pick is Adam Hadwin from Canada. Adam’s got an all-around great game, especially for our team formats in the first four sessions, and he’s had a very consistent year and lately he’s been playing well. Excited to have Adam on the team. I love his game. As I said, he’s very solid all around. There’s not any weakness. He drives it consistently well. He’s a good iron player, good thinker and is a very good putter. And he’s been there. Obviously we got heavily defeated in New York, but I observed him all that week and he didn’t flinch. He kept putting his hand up to play, and I really liked that.

My fourth and final pick…well, I guess this wasn’t a shock for anyone. He’s from Australia, former world No.1, a major champion, Jason Day. He’s played in four Presidents Cups. He’s going to come down to Australia as a hometown hero. He won twice in 2018. He’s had five top-10s this season. So you know, a solid year. And he brings a lot to the team. He brings leadership to the team. He brings a lot of experience and obviously he’s bringing some home flavour.

I’ve spoken to Jason through the year quite a few times just to see where he is, what his feeling is on playing in a team format. He absolutely, every time I spoke to him, reiterated that he’s 110 per cent in. He’s a player that can play under pressure, and these are the type of players I want on the team. That’s the bottom line. I want guys that can perform under pressure. You know, almost enjoy the pressure, because that’s the only way we’re going to get it over the line in Royal Melbourne.

So that’s it. The team is finalised. I’m excited that we have a mixture of experience and new blood. I think it balances the team really well. I must add, the only difficult part of the process was having to let down numerous others – among them Branden Grace, Byeong-Hun An, Corey Conners and Erik Van Rooyen – guys who were really, really close. Many of them are good friends of mine; that’s not an easy conversation to have, but they were all great and very supportive of the team.

On another note, I’d say we didn’t go all-out on the statistical side in our selections, but at the same time, I had to look at guys’ long-term form. Guys who have played well for a while, and yes, looking at all the stats I wanted good driving, good ball-striking obviously, but putting is very important. In my experience of these Cups, it comes down to pressure putting in a lot of instances. The four guys I chose, they are all very consistent and very strong under pressure.

Anyway, moving on, I have a busy playing schedule coming up starting with the Nedbank Golf Challenge this week. It’s always a pleasure to play in South Africa and I’ve got some great memories of the tournament, particularly my three wins, and I’m pleased that I’ve been able to support the event as it has continued to grow over the years. Then we’re at the Alfred Dunhill Championship at spectacular Leopard Creek, a tournament that I’ve always enjoyed playing whenever I can. Straight after that we make our way to Australia for what’s going to be an amazing couple of weeks – Australian Open and then Presidents Cup. Enough said, I think!

Finally, let’s wrap-up all the news from this year’s Els for Autism South Africa golf series. We had 120 players tee it up at the Ernie Els Design course at Highland Gate, always a firm favourite with the players. It’s such a beautiful place that most people turned up the day before to enjoy the surroundings and what the club has to offer. Many thanks to Vincent Coetzee and his team for looking after everyone. Congrats to our winners on the day, B Swart and M Swart, on 47 points.

Silver Lakes was up next. That’s the home course of my old buddy, and series organiser, Nico Van Rensburg. I last popped in there when the British Lions played the Springboks at Loftus Versveld Stadium. It’s a real nice estate golf course; lots of water and you need to be accurate. Thanks to Brendon Van Niewehuisen and his team for all the help. I hear 140 players teed it up that day! Well done to the winners, John Mclachlan and Theo Van Vuuren, with 51 points.

The final regular event on the schedule was at Ebotse, our fourth year there and another magnificent day thanks to our custodian, Peps Pretorius, and the support of all the club’s members who step up every year.

Then at the end of October we hosted all the event series winners at the Grand Finale at Sun City. Nico tells me it was an incredible day, played on the spectacular Lost City course. Congrats to our team winners Jurie Jerling and Leon Van Der Walt, also to individual winner Quinton Jansen who is one of our most loyal supporters. Finally, a big thank you to our event sponsor Imperial KWS Logistics and, of course. to everyone who supported us this year. We look forward to seeing you all again, and hopefully lots of new faces too, in 2020 (see schedule below).

Okay, that’s it for now. Follow me on social media by clicking on the icons below. 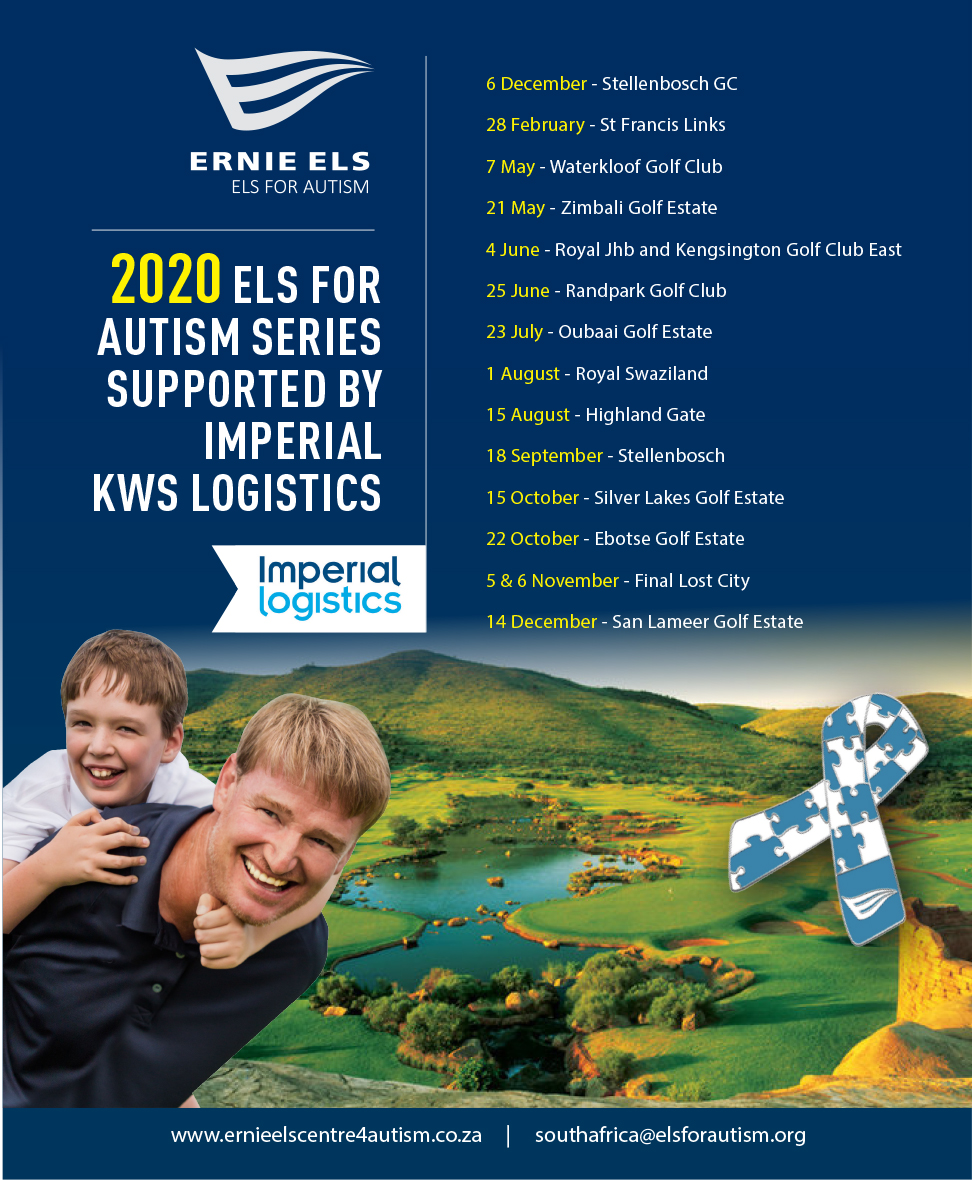