The announcement (pictured below) took place at Liberty National Golf Club on August 28th, in conjunction with an Els for Autism 2017 Golf Challenge event. Heisman Trustee Sanford Wurmfeld made the announcement to the guests gathered at the event. Els was on hand along with fellow PGA Tour golfer Branden Grace.

“We are proud to name Ernie Els the recipient of our 2017 Heisman Humanitarian Award” said Heisman Trustee, Sanford Wurmfeld. “Mr. Els is a living testament to everything the Heisman Trophy Trust represents: athleticism and a spirit of giving to others. His work with the Autism community is quite admirable. We hope that other athletes will follow in Ernie’s footsteps and consider helping those less fortunate. We look forward to honoring Ernie at our Heisman Dinner Gala this December.” 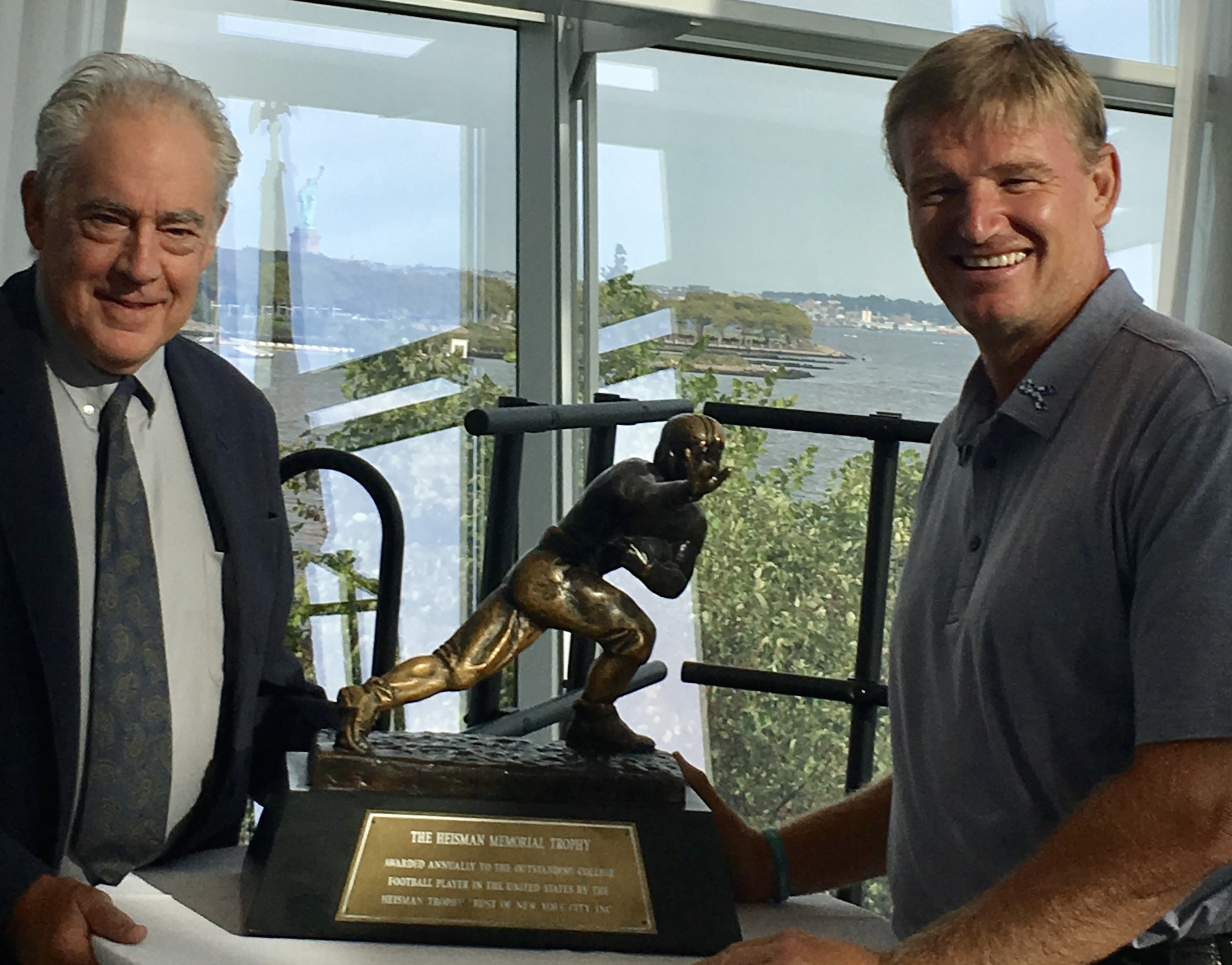 Since his son’s autism diagnosis, Els and his wife, Leizl, have been active in charities devoted to assisting those with Autism. Through the Els for Autism Foundation and the Els Center of Excellence, he has provided invaluable resources for others to realize the programs and therapies that can help an individual diagnosed with Autism. Furthermore, Els has helped raise considerable awareness for the Autism community.

“When my wife Liezl and I started the Foundation back in 2009, our son Ben had just been diagnosed with autism spectrum disorder,” stated Els. “From the beginning our goal has been to create The Center of Excellence which would be an example of what can be available to individuals on the spectrum. The Center has all the essential components on one campus, which makes it easier for families. It’s a game changer for the local and international autism community. I’m honored to receive this year’s Heisman Humanitarian Award recognizing my work with the autism community. Along with Liezl we will continue to devote our time to this important cause.”

Els joins the company of eleven other extraordinary Heisman Humanitarians including: Joey Cheek, Olympic speed skating gold medalist, for his dedication and service to the children of Darfur; George Martin, former defensive end of the New York Giants, who walked across America to raise funds for rescue and recovery workers at Ground Zero after 9/11; Pat LaFontaine, former NHL star who, through his Companions in Courage Foundation, builds interactive playrooms in children’s hospitals to keep young patients connected to their families and friends; Mia Hamm, world-renowned soccer player, who raises funds and awareness for families needing marrow or cord blood transplants and continues to build opportunities for young women in sports; Warrick Dunn, former NFL running back, who has provided homes for single parent families to honor his mother’s memory; Marty Lyons, University of Alabama and New York Jet defensive tackle, whose foundation fulfils special wishes of children with terminal or life threatening illness; Jeff Gordon, four time NASCAR Cup Series champion and founder of the Jeff Gordon Children’s Foundation, which supports children battling cancer; David Robinson, former San Antonio Spurs center, who has dedicated himself to helping children and families in need in the San Antonio community; Joe Torre, legendary baseball player/manager who created the Joe Torre Safe at Home foundation that works to end the cycle of domestic violence; Boomer Esiason, All-Pro Quarterback whose Boomer Esiason Foundation fights cystic fibrosis; and Alan Page who assists students of color achieve their dreams in furthering their education.

The Heisman Trophy Trust is delighted to welcome Ernie Els into the Heisman family as the 2017 Heisman Humanitarian Winner. Els will receive his award at the 83rd Annual Heisman Memorial Trophy Gala on Sunday, December 10th, in New York City. Tickets to the dinner gala are available online at www.Heisman.com.

About the Heisman Trophy Trust: The Heisman Memorial Trophy annually recognizes the outstanding college football player whose performance best exhibits the pursuit of excellence with integrity. Winners epitomize great ability combined with diligence, perseverance, and hard work. The Heisman Trophy Trust ensures the continuation and integrity of this award. The Trust, furthermore, has a charitable mission to support amateur athletes and to provide greater opportunities to the youth of our country. Our goal through these charitable endeavors is for The Heisman Trophy to symbolize the fostering of a sense of community responsibility and service to our youth, especially those disadvantaged or afflicted.