All the latest news and stories from the world of golf, Ernie Els Design, Ernie Els Wines, and across Ernie’s various philanthropic interests, plus a dip into the archives for a standout moment in Ernie’s career.

1. Ernie named among four new honorary members of the R&A
Four of golf’s great champions, including Ernie Els, have accepted invitations to become Honorary Members of The Royal and Ancient Golf Club of St Andrews. With 11 major championship victories between them, Ernie Els, Catriona Matthew OBE, Padraig Harrington and Nick Price are among the most successful and influential professional golfers of the modern era and are outstanding ambassadors for the sport. Ernie is a two-time winner of The Open, first at Muirfield in 2002 and then at Royal Lytham & St Annes in 2012 (pictured above).

“I would like to congratulate Catriona, Ernie, Padraig and Nick on becoming Honorary Members,” commented Clive Edginton, Captain of The Royal and Ancient Golf Club. “They have each distinguished themselves with their long and hugely successful careers in golf. As well as being great champions, they are superb role models for any young golfers to follow and embody so many of the qualities which make golf such a special sport. They have done a great deal to help promote golf around the world and this recognition is extremely well deserved.”

Speaking from his home in Florida, Ernie said, “This is a great honour and I’m very grateful to the R&A. My whole career I have always had the utmost respect for everything they do, administering the rules and doing an incredible job supporting and promoting golf at every level around the world. The R&A runs some of our greatest championships, including The Open, and I’m proud to have been able to play a part in its celebrated history. To be given honorary membership is something I’ll cherish for the rest of my life.”

2. New improved Ernie Els Winery re-opens its doors
After a lengthy period of extensive renovations, the team at Ernie Els Wines is excited to announce the re-opening of its iconic new winery. Thoughtfully selected for its prime position, the impressive home of Ernie Els Wines is framed by panoramic views of Cape Town and Table Mountain to the west and Stellenbosch and the Helderberg Mountains to the east. The winery includes an expansive new tasting room and restaurant where visitors can enjoy exceptional wines and hearty farm-style cuisine made from fresh, locally-sourced ingredients. A beautiful terrace area offers majestic views of the surrounding mountains. The restaurant is open for lunch Wednesday to Sunday, 12.00 – 15.30.

A new trophy room (pictured below) salutes the lifelong achievements of Ernie, with an exhibition dedicated to his career, including many of his original trophies and awards. There is also a merchandise shop onsite, where a range of items are available for purchase, including Ernie Els branded golfing merchandise. 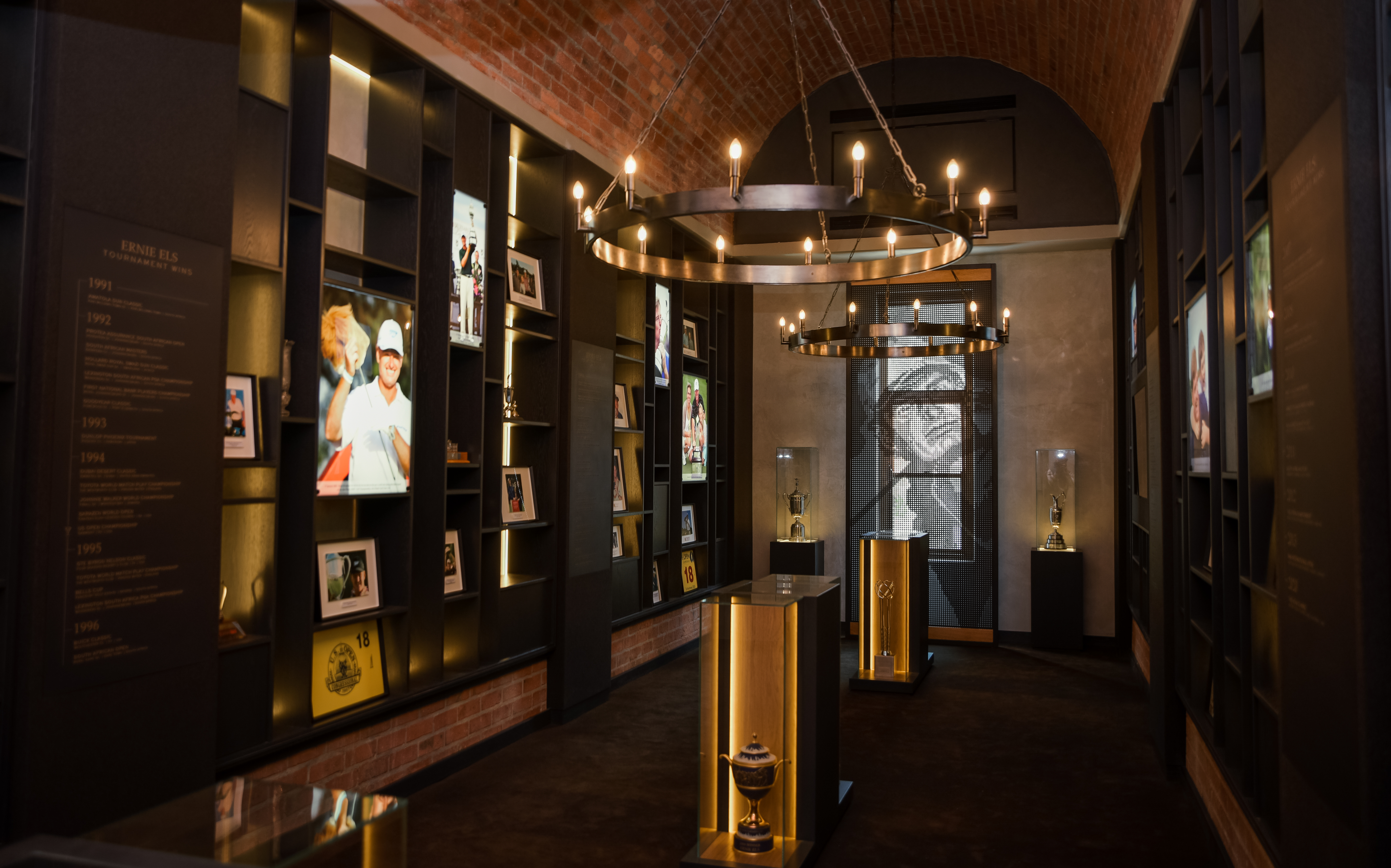 3. Ernie makes third hole-in-one in six weeks!
Ernie continued his ‘ace’ run at the PURE Insurance Championship at Pebble Beach by recording his third hole-in-one in the space of six weeks. It was the 19th ace of his career. “That’s very unusual,” he said afterwards. “Normally, you make a hole-in-one every three years. I’ve made one every two, three weeks, so it’s ridiculous. I should go to the casino, because maybe there’s a bit of luck involved.”

Ernie went on to record back-to-back 70s to finish third at Pebble and climb to second on the Charles Schwab Cup Money List.

Ernie made his 17th career hole-in-one on the penultimate hole of his first round at the Ally Challenge in August. “I’d been getting a little frustrated up to that point,” he recalled. “I’d not been making birdies and this was a hole where really you’re just looking to make par. Vijay hit a beautiful 6-iron to about three feet and I went with 6-iron, too. Hit a sweet shot there and it came out dead at the flag. My caddie Ricci said ‘nice golf swing’ and before you know it, the ball is in the hole. The beers were on me Sunday night!”

A couple of weeks later, the beers were on Ernie again at the Charles Schwab Series at Bass Pro Shops Big Cedar Lodge, when he made his 18th career hole-in-one.

4. ASM Scholarships making dreams come true for young athletes
ASM Scholarships was founded in 2018 by CEO Christopher Vidal and Ernie Els. The agency’s mission is to help the future sports stars of tomorrow; the team does this by finding universities in America that offer sports scholarships for their clients. ASM then supports its clients throughout college until graduation and then connects them with designated partners and world-class sports ambassadors to help young athletes continue their professional sports or employment ambitions.

This extraordinarily challenging year has not prevented ASM from producing a significant increase in its number of recruits; indeed, it has now enrolled 750 students from 94 countries and in 18 different College sports. The placing team has done an excellent job matching recruits with some of the most prestigious Universities in the US.

Please visit our website at www.asmscholarships.com to learn more.

5. From the Archives
It was this month, 24 years ago, that Ernie hit his first ever shot in the Presidents Cup. The second playing of this event was at the Robert Trent Jones GC in Virginia. That morning, Ernie and his partner Mark McNulty defeated Scott Hoch and Mark Brooks 2-up in the first round fourball matches. 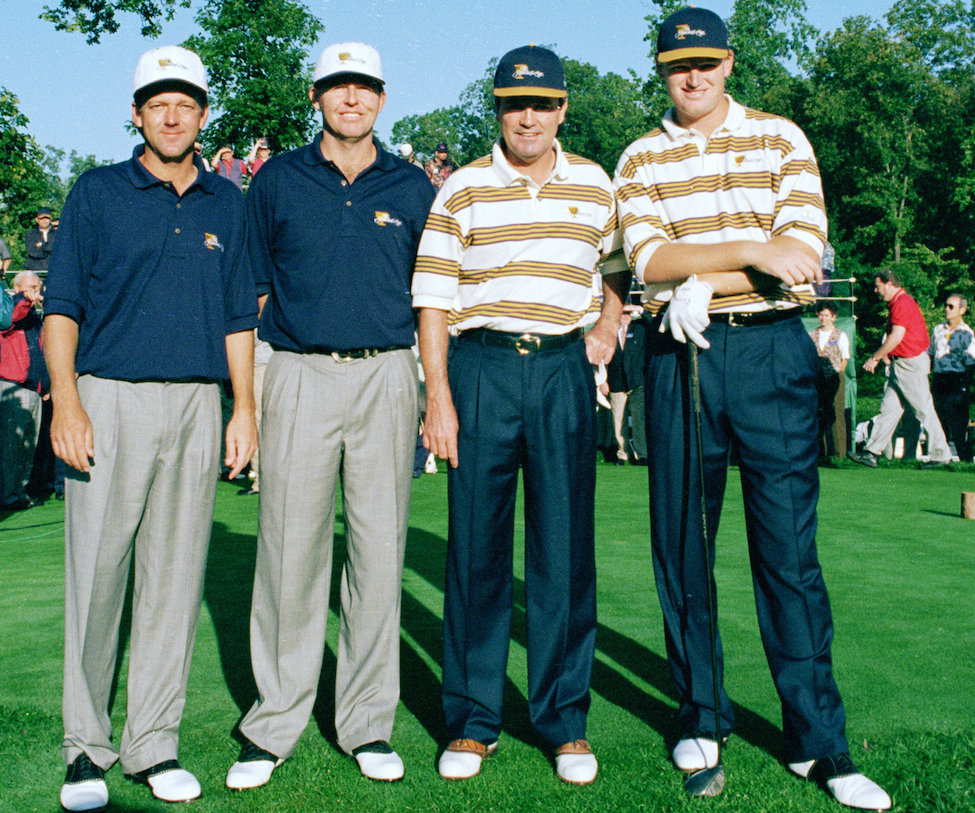