This year’s Open was a significant and memorable week even by the standards of this historic championship.

The fans were absolutely incredible from the get-go and Royal Portrush is a magnificent venue, simply one of the best you’ll find anywhere in the world, and it was presented in superb condition for this Open. Hats off to the R&A and to everyone involved at Portrush; great job. And obviously huge congrats to Shane Lowry on his epic win. The scenes at the end there were something else. What a moment for Irish golf; that must have been some celebration on Sunday evening…and Monday morning I suspect!

For my part, it was an enjoyable week and I felt like I played some really good stuff out there. Saturday’s 69 was, I’m reliably informed, a record 42nd career round in the 60s for me in the Open Championship. I like to think there are more to come and I’m already looking forward to next year’s Open at another special links, Royal St George’s on England’s south coast.

Having left Portrush on Sunday evening, we’ll spend a few days at the house in Wentworth before flying back to Florida. Tournament-wise, I’m next in action at the PGA TOUR’s Wyndham Championship and after that the European Tour’s D&D Real Czech Masters in Prague, a first for me visiting that city.

There’s also no shortage of things happening off the golf course…not least at the Els for Autism Foundation. Actually, it’s been a while since we last updated you on events at the Foundation, so let me take a moment to fill you in on that now. Congrats to the whole team on recently being named ‘Non-Profit of the Year’ by the Palm Beach North Chamber of Commerce at the Annual Leadership Awards. Well-deserved recognition.

The Golf Challenge, now in its ninth year, is enjoying tremendous support from our family of golfers, fundraisers and sponsors. I was fortunate to be able to attend the event at Duke University Golf Club in April, where we hosted a clinic with the help of Jay Bilas, former Duke alum and ESPN analyst, and two members of the Duke University Women’s Golf Team (pictured below). Talented players, both. A couple of months later, they won the NCAA’s! 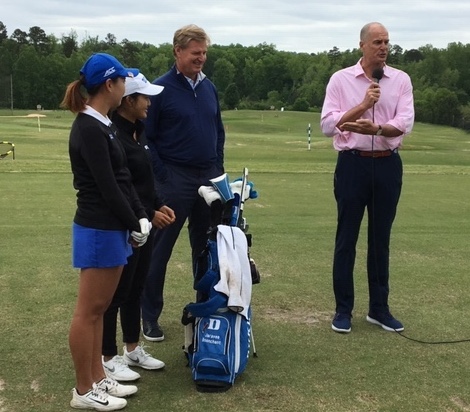 We’re now at the $1.5 million mark for this year, having completed eight tournaments out of the 17 on the 2019 schedule. That means we’re on track to once again hit our annual fundraising target, this year set at $2.7 million. In the lifetime of this event, one of the largest international charity-driven amateur golf tournaments in history, we’ve raised around $23 million. It is thanks to everyone who has jumped on board that we now have a beautiful campus to serve individuals with autism spectrum disorder all around the world.

If you want to take part in an event on this year’s Golf Challenge schedule, there’s plenty of opportunity. In fact, we have an upcoming swing of six events throughout August at some incredible venues, including the iconic Harbour Town Links. All the information you need to get involved is one click away. Also, if you’d like to receive regular updates on Els for Autism and the work that we’re doing, you can sign up for our Game Changer newsletter: https://conta.cc/2NuorYs.

Before we finish-up, there are a couple of other items of news on the sponsorship front. We’ve recently signed an agreement for me to be global brand ambassador for Clif Bar, one of the foremost producers of wholly organic energy food, snacks and drinks. I love the products and have a lot of respect for the way the company does business. It’s also inspiring to see the work they are doing at the Clif Bar Family Foundation, supporting grassroots initiatives led by inspiring people who care passionately about the environment.

We’ve also signed with SwitchGrips. Again, the product is great; that’s the foundation of any deal that we do. I’ve long been an advocate and user of the product and it’s great for me to be able to properly formalize my relationship with the team at SwitchGrips. I look forward to being able to spread the word and help introduce these game-changing grips to an international audience.